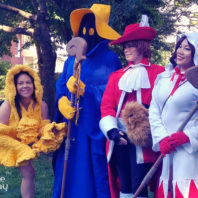 Cosplaying is always better when you have someone to share it with and this community is fantastic for that kind of camaraderie! I have been making costumes for nearly eight years and every time there is a convention coming up, I always seek out like-minded people to share my joy with. At last year’s Pax (Penny Arcade Expo), one of the largest video game consumer conventions in the nation, I reached out to a group of friends with whom I share the love of the video game Final Fantasy. I asked them to join me in making something from the franchise. Our theme? Classic Characters. We dug deep into the game’s original graphics and came up with simple yet iconic costumes for the White Mage, Black Mage, Red Mage, and the ever present Chocobo.

Instead of using conventional cut and sew methods for my White Mage, I decided to knit it with a knitting machine. The finished product was a fully fashioned sweater robe with a peplum of the iconic red triangles. 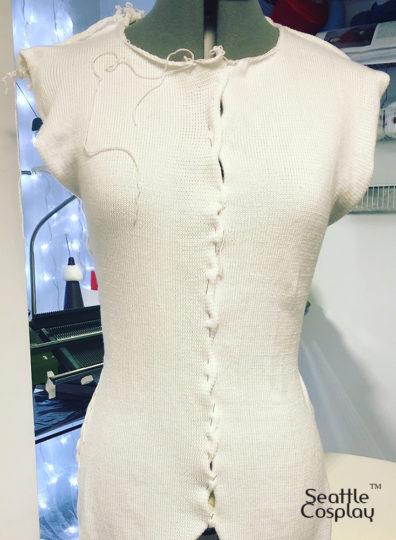 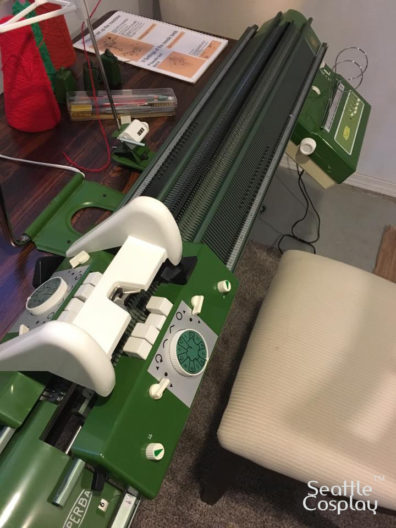 For my husband’s black mage, I used a gorgeous soft ultra-suede to make his robe and thick premium felt for his mage hat and gloves. For the veil, I used a black mesh which allows him to see through but still have an opaque texture from the outside. The group comprised of Sammy N. as the adorable Yellow Chocobo, Kelly M. as the Powerful Black Mage, Me as the White Mage, and Megan D. as the Red Mage. We formed an amazing party indeed! 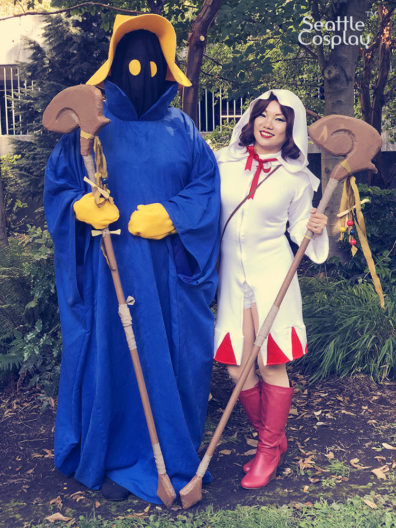 In other instances, the community comes together to offer advice and help on costumes. While traveling in Japan last year, I couldn’t help but stop by a fabric store in Osaka. While there, one fabric really grabbed my attention. It is an Alice in Wonderland type fabric, with tea parties, pocket watches and rabbits. As I am relatively new to Lolita costumes (a style characterized by a Victorian-esque voluminous skirt), I asked the community to help decide on the styling and involved them in every subsequent step of the way. 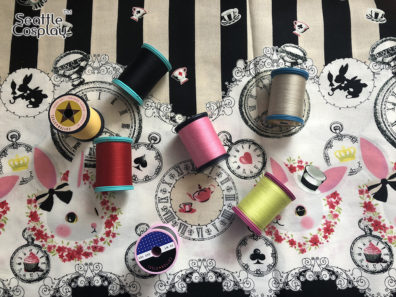 I started the conversation by posting about my fabric and my general idea of making a Lolita dress. From there, the ideas started to pour in! Suggestions were to make a dress, a parasol, etc. Ultimately, I only had six yards of this fabric, so I had to plan accordingly. Once I reached the decision to create a dress, I set out to research different styles and showed the community my favorites. From those inspirations, I designed a whole bunch of dresses. Not wanting to overwhelm and to get a clear direction, I presented two of my favorites for the community to pick from. 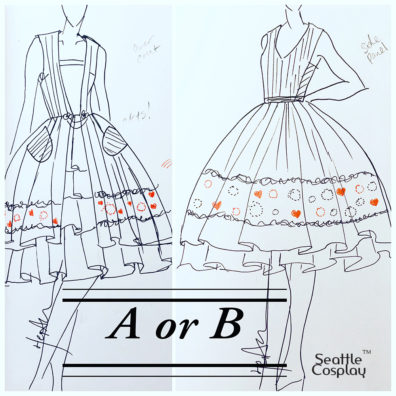 While it was clear that the community favored B, there were also additional suggestions including adding a pocket to the dress. With that in mind, I designed another more complete and detailed version. 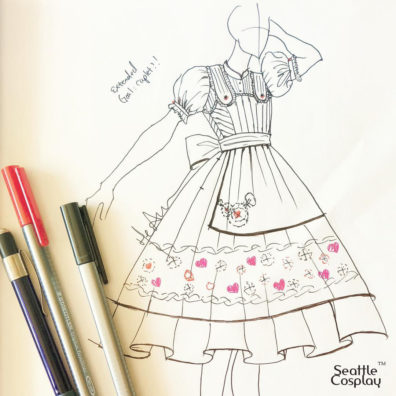 I continued to post on my social media pages for more sewing and construction videos, tutorials, and feedback and then of course, to share the final finished dress. To thank and give back to the community, I created a video demonstrating my method of draping this piece. Please check out my video below, enjoy!

About the Author: Anna He is a costume designer and cosplay artist based out of Seattle. She has designed patterns for McCall and has worked for brands including Norma Kamali, Eileen Fisher, and Nordstrom. Get to know more about Anna and her work seattlecosplay.com and be sure you’re on the mailing list to receive the 2019 Sewing & Stitchery Expo class catalog to learn about Anna’s 2019 class offerings before tickets go on sale in January.