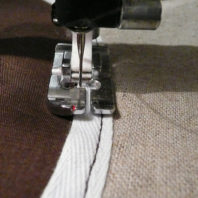 I started sewing when I was five, learning to make everything I wanted the way I wanted it. From doll clothes to Halloween costumes, to prom dresses, even my own wardrobe in high school and college that fit me perfectly. But it wasn’t until I had a child with sensory processing disorder and Asperger Syndrome that sewing became more than just a part of my everyday life. It became a gift I could give my son.

If you know children (or adults) who have sensitivities or special needs of any kind, you will undoubtedly nod in acknowledgement when anyone speaks of cutting tags out of shirts and pants, wearing socks inside out so the seams don’t touch the toes, and an outright refusal to wear jeans.

For my son Peter, the difference between a good day and a call-mom-at-work-to-pick-up-the-child day was almost exclusively down to the clothes he wore. After my otherwise mild-mannered child had a giant temper tantrum over an orange shirt, I realized I needed to pull out my sewing machine to help him. It wasn’t the color of the shirt that was the problem. The problem was that the thickness of the fabric caused the overlocked interior seams to be very bulky, therefore not smooth on the inside. The seam itself caused him such distraction, he had no attention left over to tolerate any other irregularities or external input, hence the overwhelm and subsequent meltdown. I was only able to discover the underlying issue because he was a highly verbal child at three years old. Imagine how much more difficult it is to interpret the cause of sensory overwhelm in a nonverbal baby or child (or nonverbal adult, for that matter).

The solution, as is often the case, was far simpler than the problem. I just needed to make him the smoothest possible seams in every piece of clothing he wore. Eighteen years ago, we couldn’t find tagless t-shirts or raw-edged sweats at the store, so I learned to make the most comfortable little boy clothes I could imagine. These turned out to be the “secret pajamas” on which I would later base my entire sewing philosophy. I only bought fabrics that would wash well and not pill in the dryer because those little balls of polyester fleece were irritating to my boy’s little legs.

I started to sew his shirts inside out, tacking down the seam allowances with an additional line of stitching. I sewed strips of thin polar fleece inside jeans to flatten and soften the seams. I even stitched the pockets to the front of his trousers with soft twill tape so they wouldn’t flop around or bunch up at the side seam. 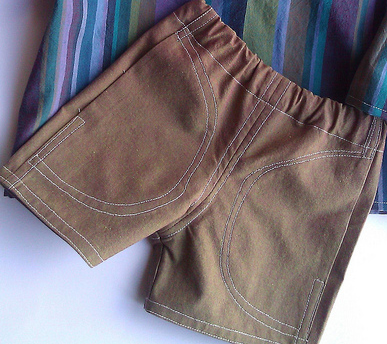 I learned to remove tags from those t-shirts he really wanted from the store and sew an extra binding on the inside back neck if I couldn’t completely remove the tags and paper or rough ribbon remained.

Between the extra special clothing and occupational therapy, my son transcended his sensory issues and thrived in school and beyond. He’s now a completely independent successful adult, going to college, working full-time, and living in his own apartment without giving a second thought to his clothing.

When we make clothes for ourselves and others, paying special attention to their specific needs and considering comfort as much as style we truly give a gift that can affect their experience. Over the years, I’ve been able to help children who would otherwise collapse with sensory overwhelm live normal kid lives.

About the Author: Karen LePage has written books about sewing for children and adults. She is the indie designer’s patternmaking secret weapon, and has taught video and in-person classes to anyone who would listen since 2008. She believes that sewing clothes is a radical act of self-love. For more information and a demonstration of specific techniques, please join Karen in class 1926 Sewing for People with Sensitivities. Sign up at sewexpo.com when the ticket office opens. Also be sure to visit her blog One Girl Circus to learn more about Karen’s experiences and how you can adopt similar philosophies when sewing for others.